Introductory Remarks on the fifth term as president of the JAHP
Koji Takenaka, Ed.D., Ph.D. 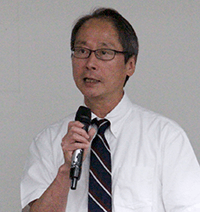 I became the president (representative director) of the fifth term, after the election held on June 4 this year. In this note, I introduce the recent activities of our association and explain its purpose, organization, operation, the annual convention, and so on.

The 38th Division of the American Psychological Association, the Association for Health Psychology, was established with the aim of improving people's health and preventing diseases. In response to a request from the World Health Organization (WHO), the chairman requested the president of the Japanese Psychological Association to play a similar role in Japan, as it is one of the developed countries in Asia. Using this opportunity, the Japanese Association of Health Psychology (JAHP) was founded in 1987 and research on health psychology exclusively began from this year. We are marking the 30th anniversary of the founding of the association this year. In July 2010, it became a general incorporated association, after which directors were elected every two years in accordance with corporate law. The fifth term has just begun.

Did you know that health psychology is now attracting attention in many countries around the world? In the 31st International Congress of Psychology, the world's largest psychology conference, which was held in Yokohama in 2016, it was found that the presence of health psychology is extremely widespread. It was placed fourth among 63 psychology categories, considering the number of keynote lectures, guest lectures, and invited symposia, and seventh when general symposia, thematic sessions, oral presentations, and poster presentations were combined. From the number of presentations, one can see that the current global trend in psychology is indeed towards health psychology. The reason behind this is that although people are aging, they are not sick, and even if they are suffering from diseases, they want the mental health required to live a full life. In addition, with the number of people suffering from lifestyle diseases, which are on the rise because of unhealthy lifestyles, there is a need to encourage behavioral change. Finally, in the current stressful society that makes mental health vulnerable, it is important to maintain mental well-being. In order to address these needs, health psychology has evolved by changing its method according to the times, while concurrently emphasizing the basic methodology required for research.

The Recent Activities of the JAHP

Let me introduce some of the recent activities of the JAHP. As I mentioned earlier, the association is celebrating its 30th anniversary this year. The development of the association is a result of the efforts of our predecessors, but as time goes by, its contents change and it requires continuous evolution. We celebrated the 30th anniversary of establishment by compiling seven books on the previous terms as commemorative publications. Three of them have already been completed and we hope to publish the remaining books after the 30th anniversary event to be held at Meiji University.

Collaboration with the Medical and Health Sectors

Looking at the world trends in health psychology, it is essential to strengthen collaboration with the medical and health sectors. In particular, there is a need to collaborate with specialized medical and health agencies and work together to make progress in research and education. In the previous term, we became affiliated with the “National Liaison Council for Promotion of Health Japan 21” and the “Tobacco Control Medical-Dental Research Network” and have actively contributed to the framework of these medical organizations. In this term, we propose to make known the features of health psychology to the medical and health fields and are also considering holding joint research and training workshops.

Our interactions with health psychology researchers in other countries are also gradually becoming increasingly widespread. Last year, while hosting the Asian Congress of Health Psychology, we had the opportunity to interact with international researchers, especially from other Asian countries. In the future, I hope that the international committee, with projects including the implementation of international collaborative research, will be the center of more such activities.

The members of this association do not consist of only those with research interest or specialization in the field of health psychology. For example, many people who are active in the field of medicine and health, such as co-medical staff, mental health services staff, and people in the fields of welfare, education, and industry are also members of the association. Health psychology is a treasure trove of knowledge and experience that makes practical use of behavioral changes, mental health interventions, etc. The association recognizes the certification “Health Psychologists” and greatly supports the activities of health psychologists through the organization known as the “Health Psychologist Group.” I hope that many people will be interested in this association and recognize our efforts.
(Professor, Faculty of Human Sciences, Waseda University)